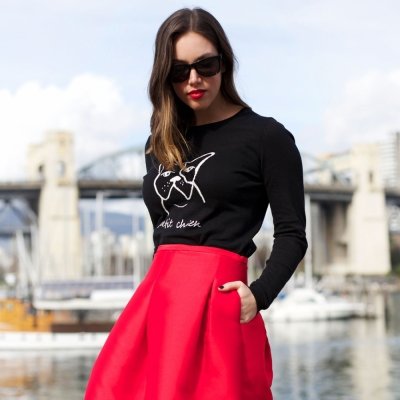 If you want to be a stay at home parent with ten kids, it's fine. If you want to be a business woman who works in her office all week, it's fine. The career path that you decide to take is one of the things no woman should be shamed for. You're in charge of your own life, so you should do whatever you need to do to be happy or financially secure. How you earn money is really no one else's business.

Some women like to show off their skin by wearing crop tops and miniskirts. Other women like to wear sweatpants and hoodies. The clothing that a woman wears has no correlation to her value or to her promiscuity. Dress how you like to dress, and don't let nasty comments make you change.

It doesn't matter whether you're straight, gay, bisexual, pansexual, transgender or anything else. Your sexuality isn't important, because we're all human. If anyone ever tries to shame you for your sexuality, ignore them. Surround yourself with decent people who actually accept you.

A scale doesn't determine a person's worth. All it does is tell them a number that helps them pick out clothes. If someone shames you for being too skinny or too heavy, cut them out of your life. Your weight is your own business, so deciding whether you want to lose or gain some pounds it is all up to you.

A lot of people judge women by the number of men that they've been with. Of course, that's a ridiculous thing to care about. If you're dating someone, then yes, your number is somewhat important. But if you're not involved with them sexually or romantically, why should they care about what you've been up to in your free time?

Simply being born a woman is something that we are occasionally shamed for. That's why the sayings "you hit like a girl" and "man up" should be banned from your vocabulary. Being a woman is an amazing thing, not something to be ashamed of.

You can't change the way that people treat you, but you can change the way you view yourself. If anyone shames you for something they shouldn't, don't let it bother you. If you do, then you're giving them power that they don't deserve. Have you ever been made fun of for one of the things on this list?