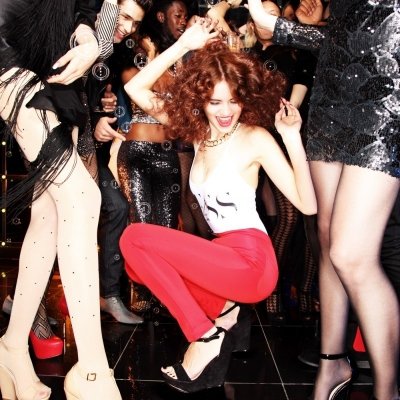 We're always worried about doing something embarrassing, because we care too much about what other people think. You've probably held yourself back from doing something that you really wanted to do, all because you didn't want to appear strange. However, if you want to be happy, you need to let loose. Here are some potentially embarrassing things that you should just do, no matter how silly they make you look:

Have you heard the expression "dance like no one is watching?" Well, it's true! The next time you hit the dance floor, don't try to dance like everyone else is. Instead of getting peer pressured into grinding, just let your body move to the music. Yes, you might look a little wacky, but you'll be having more fun than anyone else there.

2. Kill It at Karaoke

Karaoke sounds like fun until you actually get up in front of a crowd. Once you do, it's pretty terrifying, because you know that you're bound to embarrass yourself. But instead of trying to keep your voice on key, just belt out the lyrics and enjoy yourself. The crowd would rather watch someone funny than someone boring and bland anyway.

Ask out that guy you've been crushing on. It doesn't matter if he turns you down, because once the embarrassment fades, you'll be super proud of yourself for doing something so brave. The more often you ask men out, the more you'll get used to it, and before you know it you'll be on a date with the love of your life.

4. Go for Your Guilty Pleasure

You can read 17 Magazine even if you're in college. You can watch episodes of Spongebob, even if you're old enough to have a child of your own. If you like a show, song, or book, enjoy it! Stop worrying about what others would think of your likes and just let yourself live.

Don't be afraid to raise your hand and give the wrong answer. Class goes by much faster when you decide to participate. Plus, you'll end up with a higher grade at the end of the semester. If you think you know the answer to a question, raise your hand. If you get it wrong, it's embarrassing, but at least you tried. You should give yourself a pat on the back for your effort.

If your friend upsets you, tell them how you're feeling. Stop bottling up all of your emotions and start telling others when they do something that's out of line. You don't want to get too pushy and lose friendships over it, but you shouldn't be afraid to cry over something mean that happened to you. It's better to get everything off of your chest.

When your friends have a conversation about the hottest new pop singer, admit that you have no clue who they're referring to. Most people would just nod along, pretending that they're in the loop. However, admitting that you don't know something is much more rewarding. That way, someone will actually explain things to you so that you have the information.

Stop worrying about other people's opinions and start living your life in a way that'll make you truly happy. What's the most embarrassing thing that you love to do?