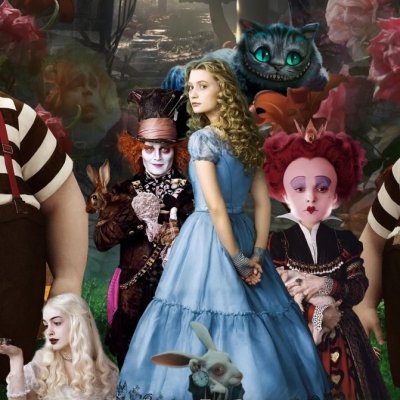 People might think you're crazy for what you believe or wear or say, but it doesn't matter. Everyone lives different lives, and holds different opinions. This is one of the Alice in Wonderland quotes that you should think about when you're feeling low, because it'll remind you that there's nothing wrong with being different. It's a blessing, not a curse.

Time is a funny thing. Although it moves at a constant pace, a minute can feel like a second or like an eternity, depending on what's occurring. Never forget that time is precious, and that you shouldn't waste a moment of it.

You're constantly changing, even if you don't think that you are. Every single day, you learn new things that shape you into the person that you are. Don't be scared if you're different than you were yesterday. That's the way it should be.

Even if you don't know what you want from life, it doesn't mean you should stop moving. You have to keep going, even though you're not sure which direction to take. All that matters is that you're trying to find happiness in life.

There's nothing wrong with believing in the impossible. In fact, it's healthy to use your imagination a bit. If you don't, then life gets boring. Don't be afraid to think outside of the box.

This is one of the more confusing quotes from the story, which will cause you to think. If you had a world of your own, what would it hold? Would it be better than reality, or are you happy with the way your life currently runs?

It's okay to question whom you are. You don't need to know exactly what you want from life, as long as you're happy. Stop trying to figure out why you act the way you do, and go with the flow.

There's no reason to worry about other people's problems when you have enough of your own. No one wants to be gossiped about, so you should respect your friend's privacy.

You're going to change throughout life, and you shouldn't fight against it. There's nothing wrong with altering your looks or developing a slightly different personality. It happens as you age.

Most things in life don't make sense. Instead of analyzing every single situation in order to figure out what made it happen, you should just accept it. In most cases, it will make life easier.

Being sane is boring. If you're not bonkers, then you're doing something wrong. The most interesting people are the ones that are a little crazy.

Alice in Wonderland is a classic, because it teaches valuable life lessons. Although the plot is bizarre, there are some pretty inspirational quotes in it. Who's your favorite character from the story?