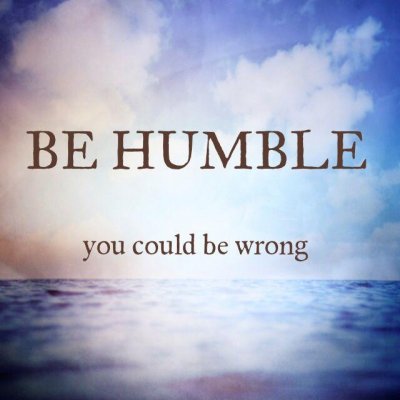 It’s hard to admit you’re wrong. So many of us either let something hang than admit it. Others will argue the hind leg off a donkey to insist they are right even though they know they are wrong. And some will try and admit they’re wrong but qualify their error with a “but…” trying to cancel out the mistake by deflecting the issue. It’s a sign of confidence and class when you can admit you’re wrong and do it with grace and humility. Here’s how:

1. Learn from Your Mistake

Nobody, and I mean nobody, likes to be on the losing side of an argument, whether it’s between friends, family, or strangers. Not only must you learn how to admit you’re wrong, but you need to learn from your mistakes to try and make sure you don’t have to be in that position again. It’s awkward for you and for your company, but think about how you contributed to the argument and resolve not to do it again.

There is nothing worse than a sore loser. If you have made a mistake and the time has finally come to admit it and take it on the chin, try to do so with as great a degree of class and humility as you can. By showing that you know how to be graceful in defeat, you will be able to come away with some dignity intact and will have saved yourself further arguments down the line.

3. Do Not Make Excuses

By the time an argument has run its natural course, it is often pretty clear who the fault and blame lies with. If this ever happens to be you, the absolute worst thing you can do is try to make excuses for your poor behavior. By being an adult, owning up to your part in the conflict, apologizing with meaning and ending on honest terms, your company will leave the argument with a much higher opinion of you then if you had tried to come up with a handful of lame excuses.

Sulking is one of the most unhelpful and unhealthy things you can do after an argument. The act of sulking does nothing to affect who you have disagreed with, but rather just leaves you dwelling on the past and not able to move on with your day. The best thing to do is just let it go. This probably wasn’t the first argument you have lost and it most certainly won’t be your last. Pick your battles and do not dwell on hurt feelings.

5. Remove Yourself from the Situation

Once an argument has finished, no matter how hard people try, there is always a tense and uncomfortable atmosphere in the room. In order to save your dignity and save slipping in to another fight, make your polite excuses and remove yourself from the situation. As long as this parting is done in a civil manner, it will be good for all people involved.

Do not fall in to the trap of being one of those people who holds a grudge. Even though you have lost the argument, the chances are that who won it will want to forget the episode just as quickly as you. Avoid stoking up any fires by completely moving on from the incident. Let bygones be bygones, the past is in the past and we can all learn from our mistakes.

7. Be the Bigger Person

Sometimes you will suffer the misfortune of losing an argument to a person who simply will not it die. These kind of people love to rub their rightness in your face until you snap and the row begins all over again. If this is case, be the bigger person and try not to let this goading get to you. You have been wrong originally but in remaining passive to their carrying on, you will be showing a great deal of grace and humility.

This is a lesson our parents try to drum into us as children yet it plagues many adults all their lives. It is one of my biggest faults. I simply can’t bear to be wrong and still struggle with finding a way to admit it. Are you the same, or are you the opposite and always accept you’re wrong to avoid an argument? The middle ground is good – I’ll keep trying to find it!