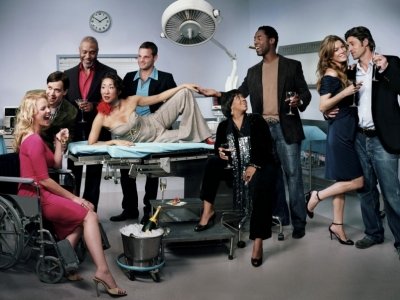 "There is always a way when things look like there’s no way. There’s a way to do the impossible, to survive the in survivable. There’s always a way. So if I can offer one piece of advice to the world’s foremost neurosurgeon. Today if you become frightened instead become inspired." This has got to be one of my favourite quotes from Grey’s Anatomy. Fear is something you and I battle with every day but this quote teaches you not to be overwhelmed by it. It doesn’t say don’t be afraid, because frankly speaking, how on earth is one supposed to just not be afraid? Instead it says be afraid anyway but use that fear to inspire you and not stop you from becoming great.

"We're all susceptible to it, the dread and anxiety of not knowing what's coming. It's pointless in the end because all the worrying and the making plans for things that could or could not happen, it only makes things worse. So walk your dog or take a nap. Just whatever you do, stop worrying. Because the only cure to paranoia is to be here, just as you are."

"For a kiss to be really good, you want it to mean something. You want it to be with someone you can't get out of your head, so that when your lips finally touch you feel it everywhere. A kiss so hot and so deep you never want to come up for air." Is this more about love, or kisses, I wonder?

"Deep down, everyone wants to believe they can be hardcore. But being hardcore isn't just about being tough - it's about acceptance. Sometimes you have to give yourself permission to not be hardcore for once. You don't have to be tough every minute of every day. It's okay to let down your guard. In fact, there are moments when it's the best thing you can possibly do - as long as you choose your moments wisely."

"If there’s something you don’t like about yourself, stop comparing yourself to others and focus on you. Be the best you."

7. Life is Wired This Way

"Pain. You just have to ride it out. Hope it goes away on its own. Hope the wound that caused it heals. There are no solutions. No easy answers. You just breathe deep and wait for it to subside. Most of the time, pain can be managed. But sometimes, the pain gets you when you least expect it. Hits way below the belt and doesn't let up. Pain. You just have to fight through. Because the truth is, you can’t outrun it. And life always makes more."

"It's important to tell the people you love how much you love them while they can hear you." Isn't this so very sad, but also so very true?

"We do our very best, but sometimes it’s just not good enough. We buckle our seat belts, we wear a helmet, we stick to the lighted paths, we try to be safe. We try so hard to protect ourselves, but it doesn’t make a damn bit of difference. Because when the bad things come, they come out of nowhere. The bad things come suddenly, with no warning. But we forget that sometimes that’s how the good things come too."

"It can be scary to find out you've been wrong about something. But we can’t be afraid to change our minds, to accept that things are different, that they’ll never be the same, for better or for worse. We have to be willing to give up what we used to believe. The more we’re willing to accept what is and not what we thought; we’ll find ourselves exactly where we belong."

"It’s one of those things people say. ‘You can’t move on until you let go of the past.’ Letting go is the easy part, it’s the moving on that’s painful. So sometimes we fight it, trying to keep things the same. Things can’t stay the same though. At some point you just have to let it go. Move on. Because no matter how painful it is, it’s the only way we grow."

"They take pictures of the mountain climbers at the top of the mountain. They are smiling, ecstatic, triumphant. They don’t take pictures along the way cause who wants to remember the rest of it? We push ourselves because we have to not because we like it. The relentless climb, the pain and anguish of taking it to the next level – nobody takes pictures of that, nobody wants to remember, we just want to remember the view from the top, the breath taking moment at the edge of the world. That’s what keeps us climbing and it’s worth the pain, that’s the crazy part. It’s worth anything."

"I think you can’t wait for someone to fly underneath you and save your life. I think you have to save yourself." See? Be your own hero!

"Failure is inevitable, unavoidable, but failure should never get the last word. You have to hold on to what you want. You have to not take no for an answer and take what’s coming to you. Never give in, never give up. Stand up. Stand up and take it."

"Did you say it? ‘I love you. I don’t ever want to live without you. You changed my life.’ Did you say it? Make a plan. Set a goal. Work toward it, but every now and then, look around; drink it in cause this is it. It might all be gone tomorrow."

"Maybe we’re not supposed to be happy. Maybe gratitude has nothing to do with joy. Maybe being grateful means recognizing what you have for what it is. Appreciating small victories. Admiring the struggle it takes simply to be human. Maybe we’re thankful for the familiar things we know. And maybe we’re thankful for the things we’ll never know. At the end of the day, the fact that we have the courage to still be standing is reason enough to celebrate."

"Just put one foot in front of the other. Just get through the day." Sometimes when a task or a difficulty seems too big, it's easier and better to just tackle it one day at a time, one baby step at a time.

19. Learn from Your past

"Do no harm. Easier said than done. We can take all the oaths in the world, but the fact is most of us do harm all the time. Sometimes even when we’re trying to help we do more harm than good. And then the guilt rears its ugly head. What you do with that guilt is up to you. We’re left with a choice. Either let the guilt throw you back into the behaviour that got you into trouble in the first place, or learn from the guilt and do your best to move on."

"Chin up. Put your shoulders back, walk proud, strut a little. Don't lick your wounds: celebrate them. The scars you bear are the signs of a competitor. You're in a lion fight. Just because you didn't win doesn't mean you don't know how to roar."

"We’ll try again and we’ll fail again because that’s what progress looks like. Progress looks like a bunch of failures. And you’re going to have feelings about that because it’s sad, but you cannot fall apart. And then one day, we will succeed and save a person’s life and we will walk on the moon."

"At some point, you have to make a decision. Boundaries don’t keep other people out. They fence you in. Life is messy. That’s how we’re made. So, you can waste your lives drawing lines or you can live your life crossing them."

"Who gets to determine when the old ends and the new begins? It’s not on the calendar, it’s not a birthday, it’s not a new year. It’s an event, big or small, something that changes us. Ideally, that gives us hope, a new way of living and looking at the world, a way of letting go of old habits, old memories. What's important is that we never stop believing we can have a new beginning, but it's also important to remember that, amid all the crap, there are a few things worth holding on to."

"The friend who can be silent with us in a moment of despair or confusion, who can stay with us in an hour of grief and bereavement, who can tolerate not knowing, not curing, not healing and face with us the reality of our powerlessness, that is a friend who cares."

"Real breakthroughs come because one is scared to death to stop trying."

If by any chance you've now been enticed you to watch Grey’s Anatomy then I must warn you that your hearts will be cut open for a weekly dose of emotional trauma. But it’s all good since any good TV show is bound to bring you on a whirlwind of emotions. Do you watch Grey’s Anatomy? Which quotes did you relate to the most?