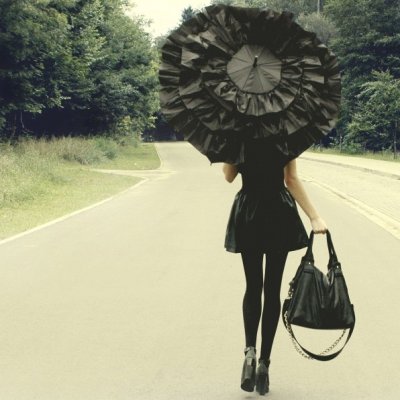 "Are you okay, Kaitlyn?"

How many people were going to ask me that?

"Yeah, I'm fine," I lied to my aunt, just like I had lied to the other aunts and the uncles and the cousins that had asked the same pointless question. This aunt pretended to believe me, only stopping to give me a quick hug before scurrying away.

Now, the family members, who had never even visited dad after he was diagnosed with cancer, were all gathered in our kitchen, eating our food and "mourning" his death, while I sat in his room and went through his clothes.

Every shirt, every tie, and every sock smelled like him. I knew that scent would eventually fade, so I wanted to take it all in while I still could. Inhale his soul. It beat chatting with relatives pretending to understand me.

When I found a jacket I didn't recognize stuffed in the back of the closet, I dug into the pockets. Maybe I'd get lucky and there would be an old receipt or photograph stuffed inside. Instead, I found a piece of paper.

It was torn in two pieces, maybe from age, maybe from me. I couldn't tell. All I knew was that it contained a list written in his handwriting. A bucket list.

The further down the list I went, the more tears trickled onto the curvy letters. Before I stained the paper with them, I went on a search for my mom.

I had to weave through women in frumpy black dresses, men in rumpled ties, and little kids who thought they were at a party, but I eventually found her hiding in the bathroom.

"I found this," I said, short and sweet. The fewer words I uttered, the easier it would be to keep my composure.

When she took the two pieces, she actually smiled for the first time since the hospital.

I didn't understand how the paper could cause such a positive reaction in her when it made my stomach twist, so I asked, "Did he even do any of these things?

"One or two," she said, nodding slowly. A dreamy smile was stuck to her face.

"What the hell, mom? I give you proof he lived a shitty life and you're happy about it?" The words were harsh, and we both knew it.

But I ** had ** just lost my father, so she let the attitude slide. She just licked her lips, pushed a strand of hair behind her ear, and said, "The paper is ripped for a reason."

I raised my eyebrows, waiting for an explanation she wasn't delivering fast enough. My sadness and anger and frustration kept fighting for dominance as my main emotion. I didn't know what to feel, but happiness was completely off the table.

"He used to carry it around with him everywhere he went. Kept it in his jacket pocket." She stuffed the papers into her own pocket, and then reached out for my hands. "He tore it up the day you were born."

"No. No," she said softly, but gripping my hands tight. "He tore it up, because those things didn't matter to him anymore."

I licked my lips, but all I tasted was salt. I felt like the bomb that wiped out dad's chances of happiness. If he never had me, he could've spent his last years at Kiss concerts eating caviar instead of driving me back and fourth from school.

"I remember..." She paused to make a noise that almost sounded like a laugh. "I remember, when he ripped it up, he said, 'I have a new bucket list. It's called Kaitlyn.' Your happiness and health, that's all he wanted."

I just stared at her.

"Sometimes, your dreams change," she continued. "I wanted to be a lawyer when I was younger, but now I'd hate dealing with all of that paperwork and all of those criminals. I didn't settle for being a mother. I decided I liked this option better." She smiled. "And so did dad. He didn't live a shitty life. He lived his version of a perfect life."

I couldn't respond, so I wrapped my arms around her and squeezed. After I composed myself, we walked back out to the crowd.

And the next time someone asked me if I was okay, "I'm fine" didn't seem like as big of a lie.

** If you'd like to read more of my stories, check out "Searching for a Soulmate." **