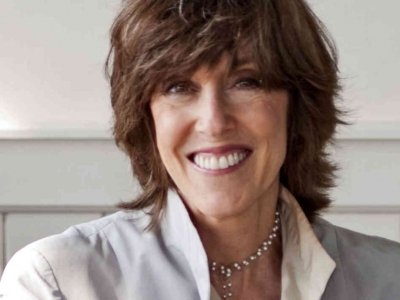 I’m pretty sure that everyone has favorite Nora Ephron quotes. Whether you know it or not, you probably quote her all the time without realizing it. She’s responsible for some of the most classic romantic comedies, and she’s written a few amazing books. Whether she’s saying something profound about writing or simply writing about the most average topic in the most magical and beautiful way, these Nora Ephron quotes will make you want to drop everything and attempt to be a quarter of the writer she was.

1. “Which is One of the Most Delicious Things Available to Women, and More Particularly to Women than to Men, I Think. It’s Slightly Easier for Us to Shift, to Change Our Minds, to Take Another Path."

This quote is actually a part of a much longer quote with a bit more background to fully understand what she’s saying. It’s from her Commencement Address at Wellesley College in 1996 and will most likely give you a whole new outlook on life. "We have a game we play when we’re waiting for tables in restaurants, where you have to write the five things that describe yourself on a piece of paper. When I was your age, I would have put: ambitious, Wellesley graduate, daughter, Democrat, single. Ten years later not one of those five things turned up on my list. I was: journalist, feminist, New Yorker, divorced, funny. Today not one of those five things turns up in my list: writer, director, mother, sister, happy. Whatever those five things are for you today, they won’t make the list in ten years — not that you still won’t be some of those things, but they won’t be the five most important things about you. This is one of the most delicious things available to women, and more particularly to women than to men, I think. It’s slightly easier for us to shift, to change our minds, to take another path." If that’s not something that makes you rethink the direction of your life, I’m not sure what will. It’s one of the most powerful Nora Ephron quotes because it's so freeing and inspiring to fully realize that we can change, and even more so, that we are changing everyday. We’re not the same person we were five years ago, or even last year for that matter.

2. "so Much of What I See Reminds Me of Something I Read in a Book, when Shouldn’t It Be the Other Way around? I Don’t Really Want an Answer. I Just Want to Send This Cosmic Question out into the Void. so Good Night, Dear Void."

This quote is from Nora’s movie You’ve Got Mail, and it’s one of its most classic lines. It’s something that I’ve always pondered, especially after the first time I heard it. Maybe it just means you’re well read, or maybe you’re not experiencing life to the fullest. Either way, it’s personally one of my favorite lines that Nora Ephron’s ever written.

Nora Ephron wrote an entire section about reading in one of her books and if you’re an avid reader, you’ll know what I mean when I say that it’s absolutely magical. She probably sums up everything you’ve ever known and loved about reading. If you haven’t read her book “I Feel Bad About My Neck,” you need to as soon as possible. The entire book is amazing, but that portion especially is one of my favorites.

This is something that Nora’s mother always told her, so it was something she lived her life by. At first, it confused me. One day I found something she said that better explained it. She said, “My mother wanted us to understand that the tragedies of your life one day have the potential to be comic stories the next.” I think that’s a wonderful way to look at life. Even if you’re going through something horrific, at least you can write about it one day. If there’s something you don’t want to do, use it as material another day. This is definitely something many people should and do live their lives by, especially if you’re a writer.

5. “above All, Be the Heroine of Your Own Life, Not the Victim.”

This quote is one of the most popular quotes that women live their lives by, but many people don’t know that Nora said it. I love this quote because it really reminds you to be the person who makes your life mean something and the reason your life is special. You shouldn’t be the reason for your own demise; you should be the reason you made it!

6. “and then the Dreams Break into a Million Tiny Pieces. the Dream Dies. Which Leaves You with a Choice: You Can Settle for Reality, or You Can Go off, like a Fool, and Dream Another Dream.”

Another one of Nora Ephron’s wonderful books, Heartburn, slightly dramatizes her own divorce and this quote came as a result of that. Everyone has dreams, and everyone has dreams that die. It’s amazing that we’re not all completely jaded, and that we dare to keep dreaming. I love how she captures that so well, especially at a time that she was personally experiencing it.

If you’re a writer especially, this quote is for you. Even if you aren’t a writer it’s a good way to look at life. It’s so easy to turn an embarrassing or humiliating situation around and get a laugh or two out of it that isn’t directed at your own pain.

8. “to State the Obvious, Romantic Comedies Have to Be Funny and They Have to Be Romantic. but One of the Most Important Things, for Me Anyway, is That They Be about Two Strong People Finding Their Way to Love.”

9. “I Try to Write Parts for Women That Are as Complicated and Interesting as Women Actually Are.”

We’ve all seen the stereotypical “blonde bimbo” or “nerdy girl” portrayed in movies. One of the most special aspects of Nora Ephron’s films is that her characters, especially her female characters, have so much more to them than a stereotype. They’re complex people with complex storylines and characteristics.